Sexual assault can be devastating for victims. Unfortunately, in 2017, there were 534 instances of rape in the San Diego region, which is a 70% increase from 2013. Rape and sexual assault are serious crimes that occur all over the country, but this sharp increase in San Diego is particularly disturbing. Rape and sexual assault are crimes that the legal system hasn’t always taken as seriously as it should. Because of this, personal injury lawsuits are often a victim’s only chance at justice. Consider the historic recent settlement of Michigan State University with the victims of Larry Nassar for $500 million.

No one can restore what an abuser takes or repair the damage to the lives of his victims, but a personal injury lawsuit can bring awareness to some semblance of justice to survivors and perhaps prevent others from suffering the same harm. Contact the attorneys at Estey & Bomberger for compassionate legal help after a sexual assault or rape in San Diego.

What Is Sexual Assault?

The law defines sexual assault by degrees, so victims may have to explain to law enforcement the degree to which they suffered sexual assault. Though challenging enough for adults, this would be even more difficult for victims who are children. Whether an adult or a child, victims should seek counseling to help them recover after sexual abuse or assault.

Some common types of sexual assault include: 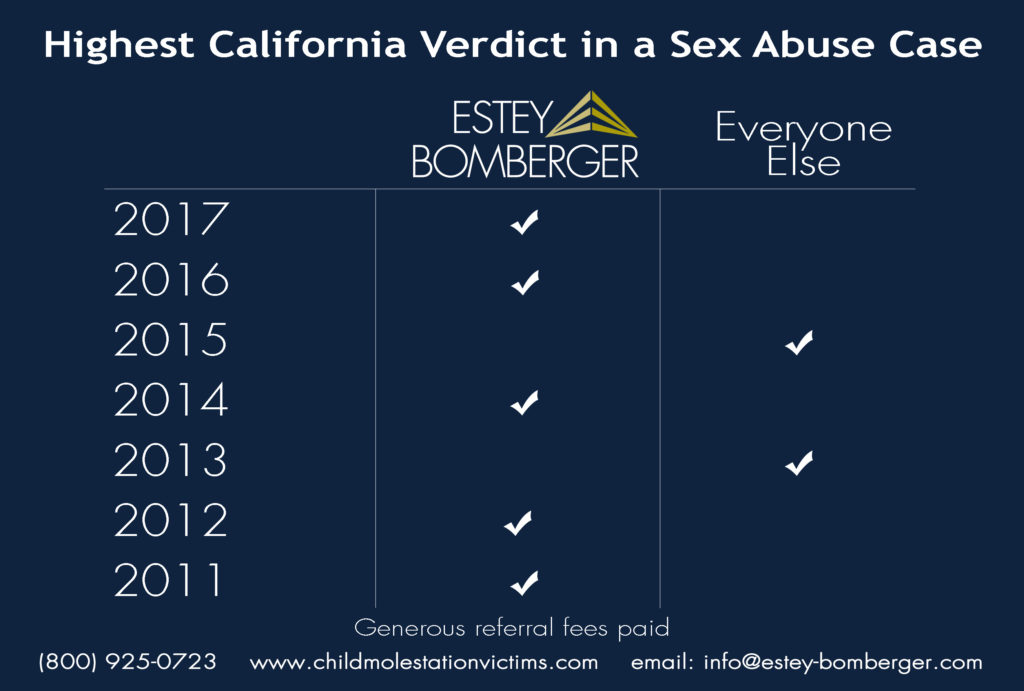 Though sexual assault can mean many things, California law offers specific and detailed information about what constitutes rape. In California, rape occurs when:

In California courts, the foundational decision about whether the act was rape depends on how the victim feels about the incident. Any sexual penetration, however, is enough to constitute rape charges.

Punishments for Rape in California

No matter in which state the offense occurred, the punishments for rape are severe. In California, the prison sentence of the perpetrator depends on factors such as the age of the victim and the nature of the sexual abuse. Depending on the situation, the perpetrator’s past acts, and the severity of the assault, a rape offender will face three, six, or eight years in prison.