What’s the Difference Between Uber Civil and Criminal Cases?

Uber has become extremely popular all over the country, providing countless app users with a convenient and affordable alternative to traditional taxis and public transportation. Despite overwhelming interest from the public and the ease of use of the platform, Uber has faced significant backlash due to the conduct of some of their drivers.
Rideshare companies like Uber faced recent legislation that required these platforms to insure motor vehicle accidents their drivers cause. Uber drivers are not traditional employees; they are independent contractors. Uber may not owe them the same benefits as traditional employees, but the company is still responsible for vetting drivers and fielding complaints about drivers. When Uber drivers attack or sexually assault their passengers, these situations typically result in both criminal charges from the state and civil claims from victims.

A recent CNN investigation reported that as many as 103 Uber drivers committed criminal acts in the United States in the past year, ranging from physical assaults and harassment to rape and false imprisonment. Uber did not respond to questions concerning the number of Uber drivers accused of sexual assault and other crimes.
When an Uber driver commits a crime, the victim reports the crime to the police and they investigate the matter. If evidence suggests the allegation is true, the police will arrest the offender, and he or she will face criminal prosecution by the state. However, this only serves to punish the offender and does nothing to compensate the victim. The victim of an Uber-related crime must file a civil claim against the offender for recovery.

An Uber driver who commits a crime against a passenger or anyone else will face criminal charges in accordance with that state’s laws. If Uber can prove the company followed appropriate procedures in the hiring of a contracted driver, the company can likely avoid liability for the actions of an independent contractor. However, Uber requires a confidentiality agreement for all settlements, so there is no way to estimate the impact the actions of Uber drivers have had on the company.
It is in Uber’s interest to keep these matters as quiet as possible. While the company may not face liability for specific incidents, it stands to lose tremendous amounts of money if the growing numbers of sexual assaults and other crimes committed by Uber drivers tarnish its image. People will stop using the service if the perceived threat of assault or rape from an Uber driver appears too great. 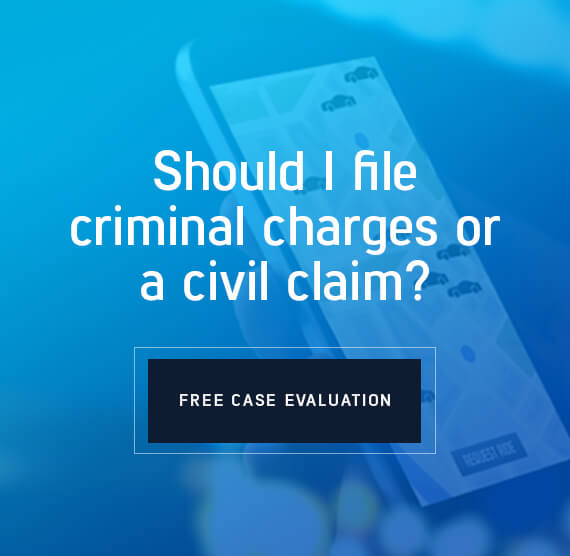 What Can Victims Do After an Uber-Related Crime?

Filling a lawsuit for an Uber-related crime follows the same basic framework as any other personal injury. The victim must prove that the defendant in the claim was negligent or intentionally caused harm to the victim. The victim must then prove the extent of the damages and losses suffered so the jury has a firm understanding of the impact of the event on the victim and can award appropriate damages.
When an Uber driver faces criminal prosecution as well as a civil claim from a victim, the evidence used in a criminal case will likely come into play in the civil case from the victim. This works in favor of victims, as it can be easier to prove that the defendant committed the alleged crime, but it may also limit the victim’s access to compensation.
An experienced personal injury attorney can help a client navigate a civil claim that runs in tandem with criminal charges and ideally maximize the client’s recovery. A sexual assault may incur significant medical expenses for immediate and long-term care, pain and suffering, and even lost income from the time the victim had to miss work following the crime.
If you were injured in an Uber accident or suffered an assault in an Uber, contact us about your case today! (619) 295-0035