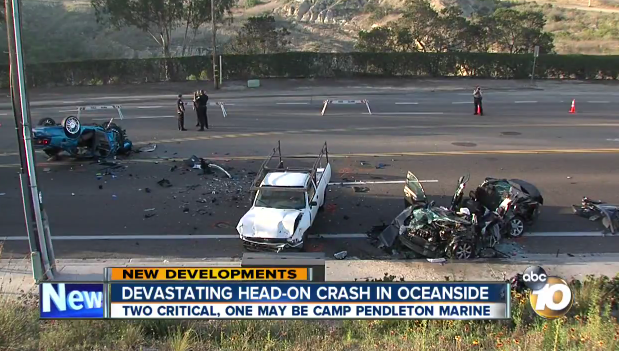 Five people were injured Monday evening in a major head-on collision on Oceanside Boulevard, 10 News and other news outlets reported. The crash involved a 2003 Chevy Impala that was traveling westbound and a 2010 Mazda heading east. The Impala veered into eastbound lanes and collided head-on with the Mazda. Following that collision, the Chevy collided with a 1993 Toyota pickup that had been behind the Mazda. The man driving the Mazda suffered head trauma, a broken arm, and a broken leg. He had to be extricated from his vehicle with the Jaws of Life and was airlifted to Scripps Memorial Hospital. The driver of the Impala was also flown to Scripps Memorial Hospital with serious injuries. A passenger in the Impala was taken to Tri-City Medical Center in Oceanside. The driver of the pickup truck suffered a facial laceration and complained of chest and abdominal pain. She was taken to Palomar Medical Center by ambulance. Police are investigating the cause of the collision and asking any witnesses to call 760-435-4882.