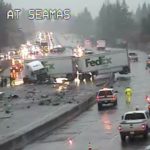 A 45-year-old Elk Grove man tragically died Thursday morning in a collision on Interstate 5 involving a big rig, the Sacramento Bee reported.  The accident occurred in heavy rainfall around 6 a.m. on Interstate 5 near Seamas Avenue. A CHP officer told the Bee that the reason for the crash was still under investigation, but that hydroplaning on the wet roadway was a possible factor.  The big-rig was travelling southbound when the driver lost control and struck the center retaining wall. The man that died was driving northbound. The female driver of the Fed-Ex truck was not hurt.