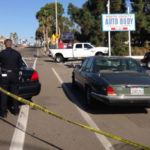 A 12-year-old very tragically died this morning after he was struck by a car while riding his bike, NBC San Diego News reported. The fatal accident was reported just after 7 a.m. near the intersection of Oceanside Boulevard and South Coast Highway. According to the news report, a man was pulling out of the driveway of the Oceanside RV Park to turn left and head south, when he head a thump. He pulled his white Dodge Ram 3500 to the side of the road and reaized a boy had been pinned underneath. The boy was transported to Tri City Medical Center via helicopter, but died of his injuries.